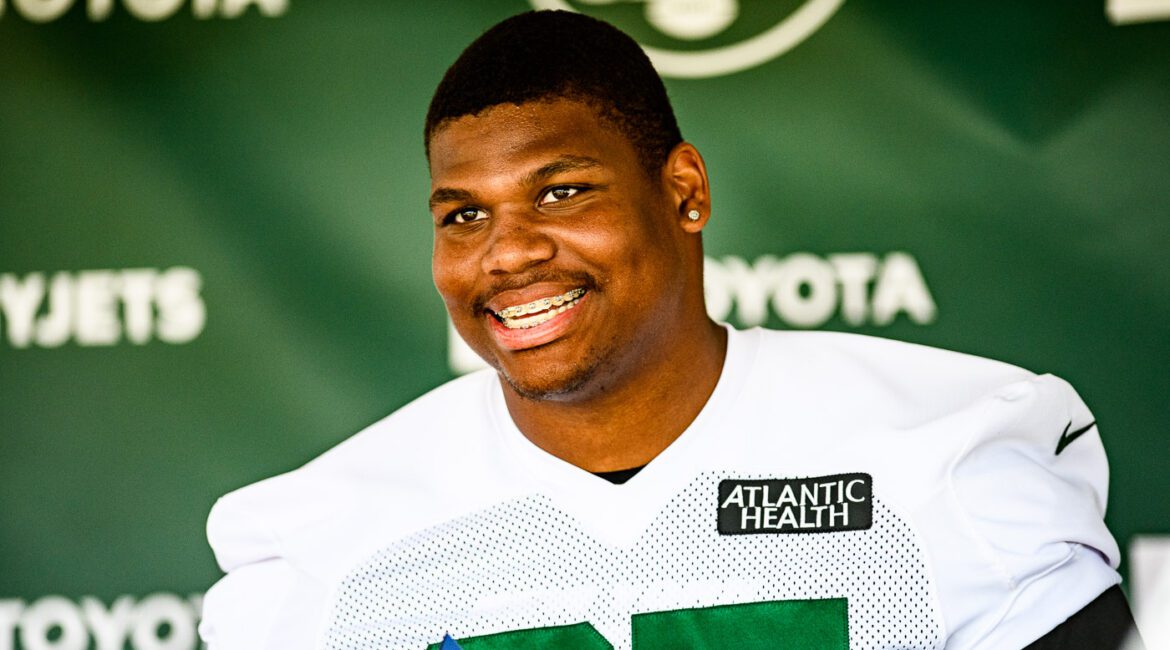 Florham Park, NJ – The offense won the day on the second practice of training camp. But one specific defender made a handful of plays and announced his presence to all. The offense was able to move the ball up and down the field with relative ease for the most part as Sam Darnold continued to be in total command of the offense. Tomorrow will be the first practice in full pads which will obviously ramp up the intensity even more. Now let’s get to today’s observations.

1) Brian Poole had himself a day – Poole missed yesterday’s practice, but he did what he needed to do to get on the field today and wasted no time showing out. Early in practice Le’Veon Bell caught a swing pass from Darnold and Poole came in with a perfect punch to knock the ball out clean for a fumble recovered by Avery Williamson. Poole would have another forced fumble later in practice and he made a leaping play on a ball thrown to Jamison Crowder to force an incompletion on the sidelines. It was an impressive day from the nickel corner and one fans will be happy to hear about because this team will need performances like that from this cornerback group.

“I know he was excited to get out there and it was good to see him involved,” Adam Gase said. “That’s what he does. He’s got his hands full going against (Jamison) Crowder everyday. I think those two guys are making each other better and that’ll battle is going to go on all camp and it’s going to be good.”

2) Running backs in the passing game – On the first series of the day Darnold hit Ty Montgomery as he ran past C.J. Mosley down the sideline for a big gain that would have gone for a touchdown. After that Darnold found Bilal Powell, split between Rontez Miles and Jamal Adams, on a nearly identical play. Then as the offense was in hurry-up Darnold again found Montgomery on a wheel-route down the sideline. Basically the running backs were gashing the defense in the passing game. Expect to see a lot of this during the season. As the running backs were busy making plays downfield things started opening up for the rest of the offense allowing Darnold to take some deep shots. Immediately after the early passes to Montgomery and Powell, Darnold hit Robby Anderson for a 50-plus-yard touchdown as Anderson toasted Trumaine Johnson.

3) Quinnen Williams – Williams didn’t practice today. Gase said he didn’t want to, “put him in a bad situation,” by practicing today. Williams had only been in one meeting before practice, but will go through a walkthrough and some meetings later and be able to practice fully tomorrow. Williams did talk after practice and it’s always a joy to talk to him, but it’s the high-praise from Gase that’s going to excite Jets fans.

“The thing is, with him, his intelligence and how he picked everything up in the spring, he’s a quick study,” Gase said. “His football intelligence is off the charts. They’re able to move him around and the way that Gregg’s (Williams) system is, they do a good job of teaching it, guys do a good job of learning it.”

Gase, however, doesn’t want you thinking the intelligence is the only impressive thing about Williams though, he has all the physical tools to match said intelligence.

“He’s in the backfield a lot,” Gase said. “I mean, he’s a good player. That intelligent just helps him. That helps him get another extra step outside of his athletic ability. That’s where you see a lot of guys up front – you look at guys that have a lot of success like, Aaron Donald, he is smart and he’s a freak athletically. So when you put those two things together, they make it tough to stop.”

Williams told reporters that the reason why he wanted as much of the signing bonus in year-one is for tax purposes. He’s still an Alabama resident right now, but by next year he will have to pay the New Jersey state tax. Obviously New Jersey will take a much bigger cut of that money in taxes so you can underestimate why he wanted as much as possible this year.

“But all of that is out the way right now,” Williams said. “I just can’t wait to compete and ball out this year with my brothers and win games.”