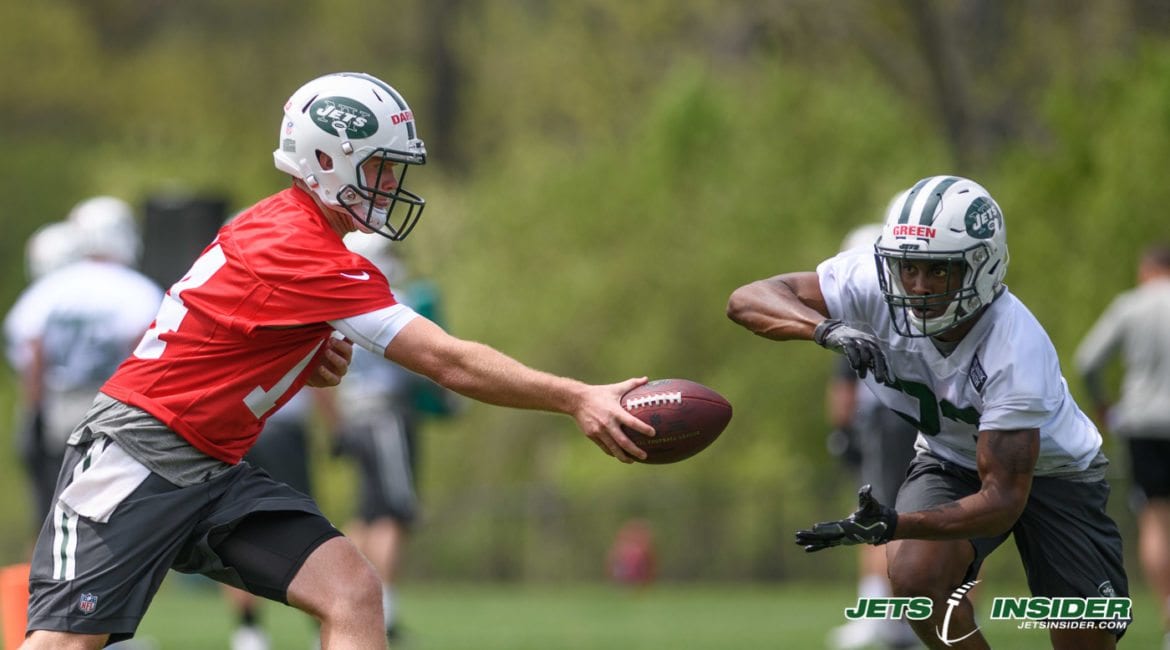 FLORHAM PARK, NJ – Week two of OTAs kicked off yesterday and as Todd Bowles is constant reminding us, “they’re just in shorts and t-shirts” so there’s only so much we can takeaway from what we’ve seen. But you don’t care about that, you want updates so let’s get right to the updates.

QBs – The quarterback group had one less quarterback this week now that Christian Hackenberg was practicing with the Raiders. This made for a less awkward situation with no quarterback standing around just watching. Josh McCown was having a lot of fun running around like a kid, cracking jokes but looking like the steady veteran he is on the field and helping coach up the younger two quarterbacks that are currently behind him on the depth chart, unlike other veteran quarterbacks McCown continues to show he’s here to help the team and if that means helping prepare someone else to take his job and be better at it than he would be then so be it.

Sam Darnold looked much better than he did last week, last week he was rushing through plays and missing throws by 10-20 yards, this week there was none of that. Darnold looked sharp, he missed some throws and had one truly terrible pass where he didn’t see the defender and threw it right to him, but otherwise the throws he missed he didn’t miss by much and he threw some impressive darts. On one play he found Chris Herndon about 30 yards down field with two defenders bracketing the big tight end yet Darnold found the tiny hole to thread the ball through and into Herndon’s outstretched arms, Herndon laid out but couldn’t complete the catch as he went to the ground. It would have been a spectacular catch but it already was a spectacular throw as Darnold put it in the only place he could to have a chance at a catch. Later on in practice Darnold threw a gorgeous high pass on the sidelines that Robby Anderson went up and high-pointed, impressive throw and an impressive catch.

Teddy Bridgewater continues to impress, overall he wasn’t quite as impressive as last week but that could be based off of expectations. Now we know that his knee looks good, he has shown no negative effects of the damage that was done to his knee and he truly looks to be 100 percent. He doesn’t seem to have any lingering confidence issues, he trusts his knee and it shows on the field. As of today the smart money is on Bridgewater winning the starting job to start the season unless another team loses their starting quarterback and offers the Jets some draft picks in return.

“He (Bridgewater) has shown no signs of weakness with the knee. he is moving around and taking every rep and every snap like everybody else,” Bowles said. “So, he is progressing and getting better.”

WRs – Quincy Enunwa was still held out of team drills and will be until training camp, but Robby Anderson and Chad Hansen made more than enough plays to make up for it. Hansen put one some weight, looks to be all muscle, and is running precision routes with confidence. Last year he earned playing time strictly because the coaching staff could trust him to be where he was supposed to be, now he looks like he could be a reliable athlete across the board.

Over the past two seasons we’ve seen what Anderson can do on the field, anyone who doubts his on-field ability simply hasn’t been paying attention, but you can see the growth in his game and Bowles thinks he’s becoming a complete receiver.

“I think from a mental standpoint as far as pre-snap reads and understanding the game better, which he is doing, and not just using his speed,” Bowles said. “He is more of a complete receiver than just a speed guy, but taking the next step as far as understanding what is happening to him and how guys are attacking him. And he has been working on that all off-season.”

Miscellaneous notes – Jordan Jenkins was nicked up so they held him out of practice, Josh Martin and David Bass got the first-team reps as outside linebacker in his place. Trumaine Johnson and Terrelle Pryor were both absent. And the Jets tight end situation looks to be shaping up pretty good, Eric Tomlinson is the steady blocker who can make sneaky good plays in the passing game, Herndon is doing more and looks to be healthy and it shows and Jordan Leggett was one of the players who really jumped out in yesterday’s practice. Neal Sterling on the other hand had a rough day, dropping multiple easy passes but for once the Jets have three tight ends in above that guy on the depth chart and that’s got to be encouraging to fans and all the quarterbacks.