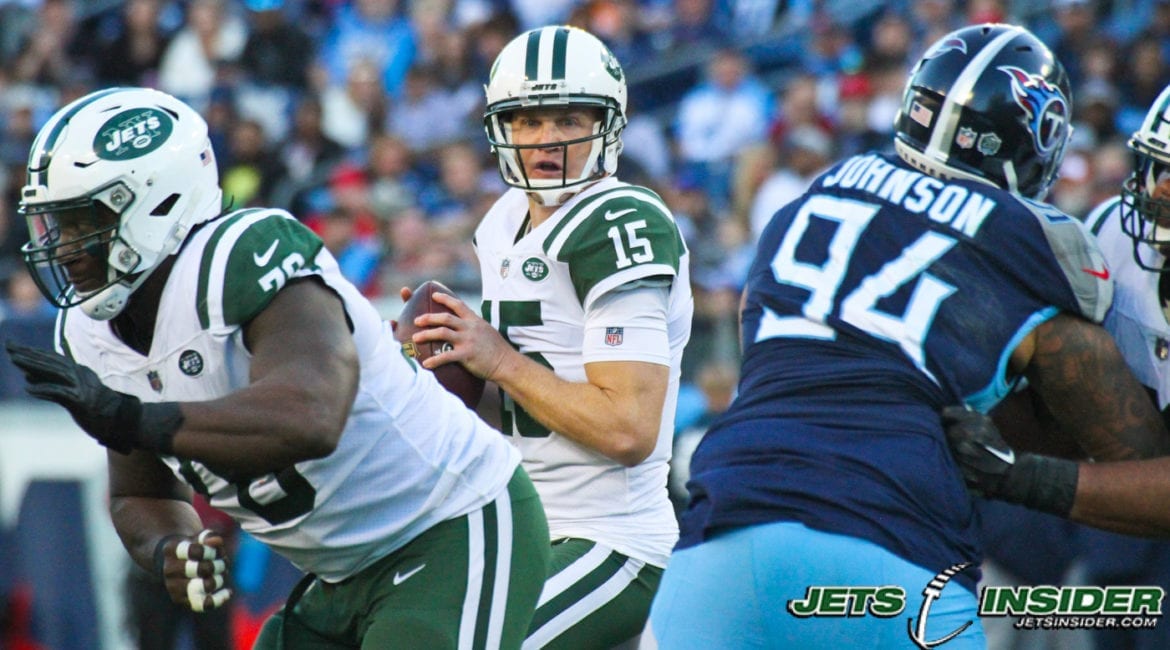 Nashville, TN- When the Jets jumped out to an impressive 16-0 lead, it looked like they were fighting for a playoff berth. All cylinders were kicking in. The offense went back to passing and running the ball effectively, the defense went back to picking off the QB for a pick six and the special teams blocked punts and PATs. With the lead 16-6 at halftime, it finally looked like the Jets were on their way to snap a five game skid. Only one problem…the “same ole’ Jets” showed up for the second half of the game leading to a comeback win by Mike Vrabel’s Titans. It was the same old horrible playing calling on offense (Jeremy Bates); same old secondary getting burned (Claiborne & Roberts) and the same old penalties that would do them in.

The Jets got off to a great start forcing a three and out on the Titans on their first drive and responded with a 54-yard field goal from Jason Myers to put them up 3-0. This would be Myers sixth field goal from beyond 50 yards this season.

On the Titans ensuing drive, Jets cornerback Trumaine Johnson picked off Mariota and took it to the end zone for a pick six, the fourth of his career. It was also the first time in six games that the Jets forced a turnover, good enough to give them a 10-0 lead at around the midpoint of the first quarter.

At the start of the second quarter, the Jets put together a well executed drive by attacking the Titans secondary through the air. McCown was able to find Robby Anderson, Isaiah Crowell, Trenton Cannon, Chris Herndon, Quincy Enunwa and Andre Roberts on just one series to help drive the Jets down the field. This drive ended with another field goal from Myers who put New York up 13-0 with a 34-yard field goal.

After the Jets defense held Tennessee to another three and out, Kevin Pierre-Louis was able to bust up the middle and block the punt in the Titans offensive zone and put the Jets back in the red zone on the 18-yard-line. Once again, the Jets could not dig themselves out from Jonotthan Harrison’s holding penalty and would have to settle for a field goal.

Mariota would lead the Titans down field just before halftime and finish the drive with a touchdown throw to tight end Anthony Firkser, his first career touchdown. The Jets had another surprise in store on special teams when Leonard Williams was able to block the PAT attempt and hold the Titans to just six points. It was the first blocked kick for the Jets since 2009.

The Jets led the Titans 16-6 at halftime.

New York would strike first on the scoreboard as well in the second half after two back-to-back long runs by Crowell, bringing the Jets into the red zone. Myers would kick a 39 yard field goal for his third conversion on the day.

Tennessee running back Derrick Henry would cut down the Jets lead after a one-yard touchdown run at the 7:44 mark. Kicker Ryan Succop would convert the PAT attempt this time and the Jets would lead 19-13.

Next the Jets would have a lengthy seven minute drive only to come up with another field goal from  Myers, who led the Jets to a 22-13 lead, nailing his fifth field goal on the day. Are the Jets ever going to score a TD?

With help from a Jets face mask penalty, the Titans would take the lead with 36 seconds left on the clock. Mariota would find Corey Davis for an 11-yard touchdown giving Tennessee their first lead of the game and the win.

And the wheels came off the track. Once again the Jets red zone offense was pathetic. This has become a reoccurring problem every game with Jason Myers having to bail them out. Andre Roberts returned a 61-yard kickoff return at the start of the third and the Jets did nothing with it. Any time there is a big play that gives an amazing opportunity for great field position or a chance the score, Gang Green never capitalizes on it.

Cornerbacks Morris Claiborne and Darryl Roberts were like two pieces of toast, burned all day.  Both players performed dreadfully in man coverage against deep passes which allowed Mariota to connect with his receivers deep into the Jets red zone. And the shame of it was that both corners were playing 20 yards back off the receiver. Claiborne also committed three penalties that helped the Titans continue their march down field.

Penalties were also a large part today’s matchup. New York had 11 and Tennessee with eight. This was one of those games where the penalties directly impacted the outcome of the game. Most of the penalties were on the offense today, affecting field position for both teams. Holding calls essentially killed drives for both teams limiting their chances of putting together a consistent drive down field. For the Jets, every time they made a great play it was nullified by a penalty.

“Dumb mistakes at dumb times have cost us ball games and that’s why we’re in the position we are in”, he later added.

One positive takeaway after today’s game is that the Jets move up to pick third in the draft.