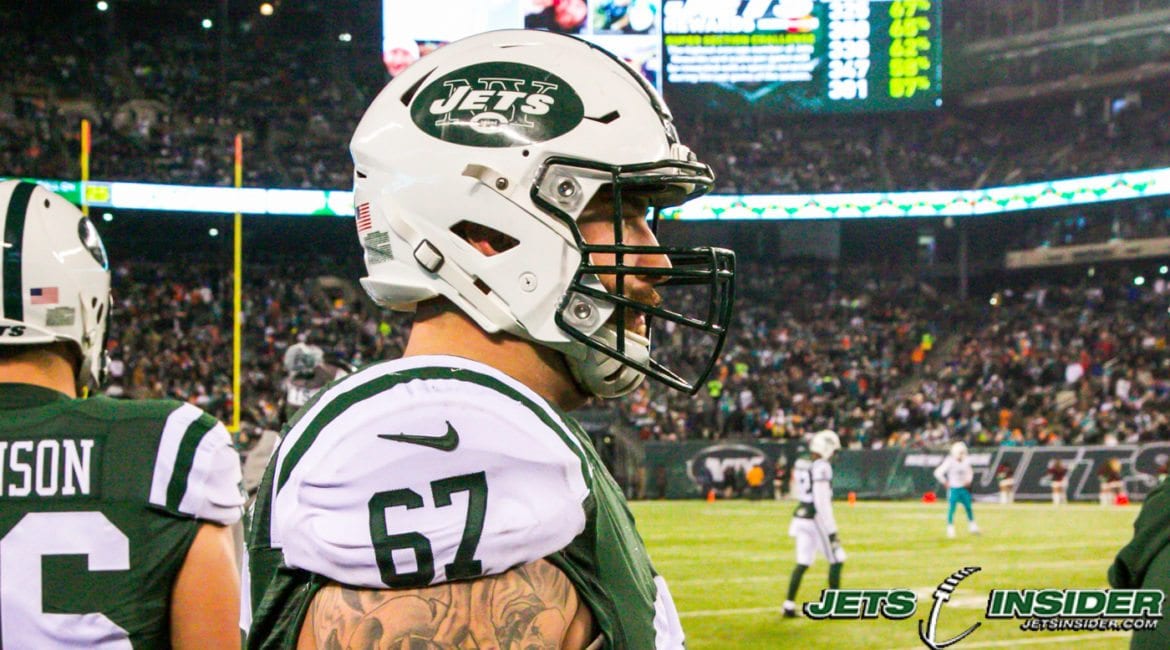 Florham Park, NJ— During the Jets time in Richmond the temperature was rarely below 90 degrees, today Todd Bowles moved the practice to the morning to give the players a cooler practice. The players were in work mode, and look ready for the regular season to be here.

The Jets seem to be increasingly comfortable with the idea of Sam Darnold starting, and he is getting a majority of the reps in practice to work out the kinks. Darnold has been happy with his growth so far, saying “I’ve seen myself grow a lot, it’s more of a testament of how comfortable I am in this offense, with the receivers, and the lineman.”

Teddy Bridgewater had a good day as well, as he lead a scoring drive to end practice in which he went five-for-seven including a touchdown strike right over the middle of the field to Jordan Leggett.

Josh McCown got considerably less reps than Darnold and Bridgewater.

It has been commented on plenty at this publication, but the quality of the tight end group is going to lead to an NFL-caliber tight end being released or put on the practice squad. With Eric Tomlinson and Chris Herndon seemingly safe atop the depth chart, the last spot has been up for grabs. Although Neal Sterling has played well at times, Leggett and Walford have been one level above.

Leggett is coming off a knee injury he suffered in week two of the preseason that kept him out all year. He was still nursing the knee along at the beginning of camp, but since the trip to Richmond, the 6’6” Clemson product has been a consistent target for all three quarterbacks.

The same can be said for Clive Walford, who looked to be brought into camp as a camp body with very little chance to make the final roster. Walford has been one of the Jets better receiving threats throughout camp, and if he loses his spot to Leggett he will almost certainly get other looks from NFL teams.

Offensive Line is a red flag

The Jets offensive line play against Washington last Thursday night was abysmal. At one point, two blockers ran into each other. That is not a finely tuned machine like the front-five should be.

Kelvin Beachum and Brian Winters were both suited up today, and before practice they were doing blocking drills together. Neither of them took part in team drills, but it’s a promising sign for a team bereft of line talent, although Jonotthan Harrison has been playing well in Winters absence.

The line was never going to be a strong suit for the Jets this year, and it looks like the Jets are planning on incorporating a lot of short passes, and they may actually use their tight-ends, something Jets fans may not be used to seeing only one year removed from completing just 18 passes to tight ends Austin Seferian-Jenkins and Brandon Bostic in 2016.

Frankie Luvu got some first team reps, and chased Darnold out of the pocket forcing him to throw it away. Chris Herndon returned to practice, as did Isaiah Crowell, but with a red jersey to not get hit. Trumaine Johnson was held out, but he has a sore hamstring and Coach Bowles said other corners needed some reps. Nathan Shepherd had his leg wrapped and appeared to favor it, but it did not seem to impede his play as he was able to record a sack.

The Jets Select,Jets Extend Brant Boyers Contract,Three Points Mini Camp Day 1 Of 3,Its Put Up Or Shut Up For Jets,Defense Dominates Final Day In Cortland,Jets Bring Back Jeremy Kerley On One Year Deal,Jones Running On Another Level,Rb Romar Morris Ready For Competition,Training Camp Update 821,Revis Speculation The Game Is The Game