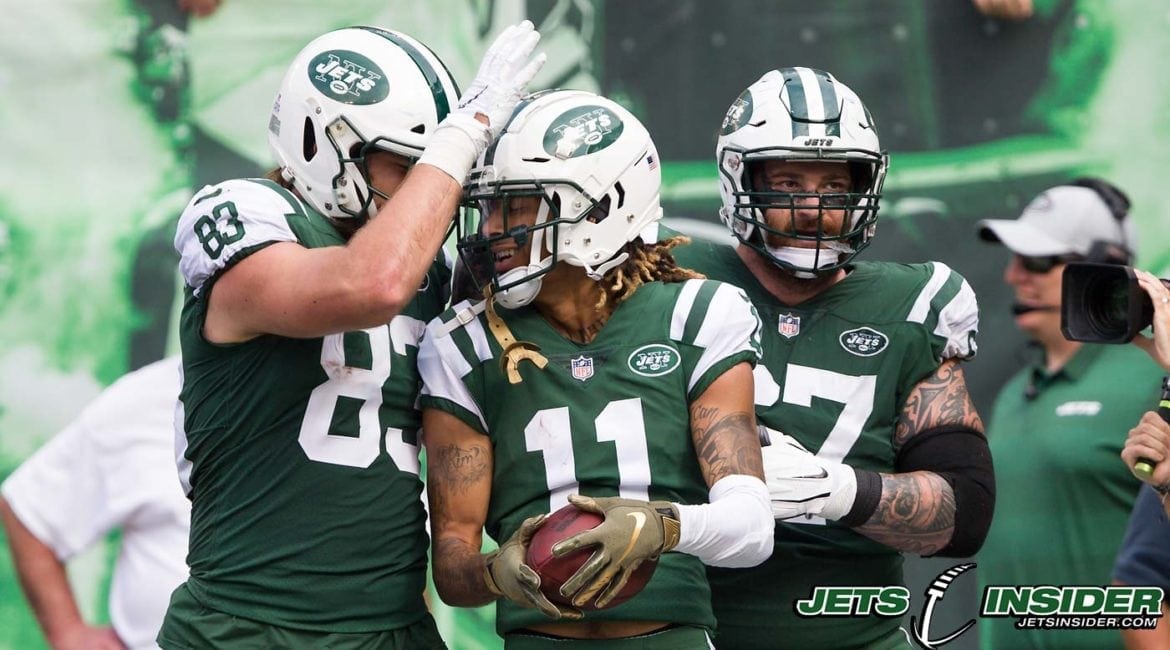 Well damn, thank you New York Jets for making this Game Balls article incredibly easy to write. Sometimes, after games like yesterday, the articles write themselves. 323 rushing yards, a 76 yard touchdown pass and a 35 yard touchdown both to Robby Anderson, pressure on the opposing quarterback, yeah you get the idea. Let’s not waste anymore time and get right into it.

Offensive line and Isaiah Crowell – Crowell gets the shine, and deservingly so because he ran hard and made plays even when the offensive line wasn’t opening up lanes the size of the Holland Tunnel, but the offensive line absolutely dominated the Broncos defense. Crowell ran for a franchise record 219 yards but even he knew most of the credit for those yards goes to the line.

“Really, I just wanted to congratulate my O-line because without them, I wouldn’t be able to do that,” Crowell said. “They were opening up holes all game, and I felt like JB (Jeremy Bates) basically committed to the run and I feel like our O-line did their thing.”

Did their thing, indeed. Bilal Powell also chipped in with 99 yards on 20 carries, 4.9 yards per carry, but it was Crowell who did most of the damage and simply wore the Broncos defense out. 219 rushing yards on 15 carries at an absurd 14.9 yards per carry clip, is simply ridiculous. On top of the dominance in the run game the pass protection was also outstanding as Sam Darnold was working with a clean pocket all day.

Robby Anderson – Anderson has had a tough go of it to start the season, Darnold was having trouble finding Anderson or finding enough time to find Anderson, he had those two fumbles but despite fans overreacting by dissecting his body language after the whistle Anderson never stopped playing hard and you can see that on the first touchdown of the game on the long Crowell run. Anderson disrupted three different Broncos defenders, getting in their way just enough to let Crowell keep running into the end zone.

Of course that’s not what you’re here for, you want to read about the two touchdown passes. On the first one, Anderson took off, hit a slight hesitation move and left Bradley Roby literally in the dust. Anderson had Roby beat by over five yards to give darn old an easy throw to make and Darnold didn’t disappoint as he placed it perfectly in front of the blazing Anderson. On the second one, the coverage from Roby was much better, but Darnold again threw a perfectly placed ball and Anderson showed off his concentration as he looked the pass into his hands and managed to stay in bounds. Quincy Enunwa has an uncharacteristically off day, but when Darnold can find Anderson as he stretches the field like he did yesterday the rushing yards will be there and soon enough both Anderson and Enunwa will have it clicking on the same day and we can finally stop listening to people claim that the Jets have no weapons in the passing game.

Leonard Williams – It was far from a solo effort here, the entire defense chipped in to frustrate the Broncos offense but this was the game fans have been waiting for from Leonard Williams. Williams was still facing double teams but it didn’t matter because he was simply that dominate. Even on games when Williams doesn’t show up on the stat sheet he still holds a lot of value because he occupies so much attention from the opposing offense he frees up his teammates to make plays, that’s why it’s nonsense when you hear anyone say Williams disappears or doesn’t impact the game. But elite defensive lineman still find ways to dominate even when doubled and that’s what Williams did yesterday, he wasn’t doubled on his two and a half sacks, but he took advantage of those moments and made the plays when he needed to.

Todd Bowles – I’ve been extremely critical of Bowles and I stand by my criticism but I will also give credit where it’s due and Bowles deserves a ton of credit for yesterday’s game plan. Bowles’ defense was aggressive and creative, twists and stunts and delayed blitzes had the Broncos on their heels all day. The offensive game plan obviously worked close to perfection but they didn’t seem to do anything different other than execute. The Broncos were ready for the Jets short passing attack, constantly batting the passes away including one for a pick. People will point to the deep shots as something different but those plays have been getting called and Anderson has been getting open it’s just yesterday the line gave Darnold enough time to find Anderson.

The energy level was there the entire game, even after the Powell fumble and getting down 7-0 the energy stayed the same, there were very few penalties, no way too conservative decisions and no wasting of timeouts. If these problems reemerge I will be right here to harp on them again, but they disappeared yesterday so Bowles gets that credit this week.

The Good Job, Good Effort Award goes to Marcus Maye – Maye set an NFL record for longest interception return WITHOUT scoring a touchdown. On the last play of the game Maye picked off Case Keenum in the end zone and ran the ball back 104 yards before being tackled/collapsing on the one-inch line. It was a great play, but it led to far more great jokes as his teammates relentlessly roasted him about it after the game. Maye was a good sport about it and admitted that he needs to get in better shape, you could easily see how gassed he was just halfway through the return. If that play happened in the first quarter he would’ve scored easily, but after playing a full 60 minutes Maye was tuckered all the way out. But remember it’s just his second game back after returning from surgery so he’s still working his way back into game shape, don’t expect him to. fall short next time.