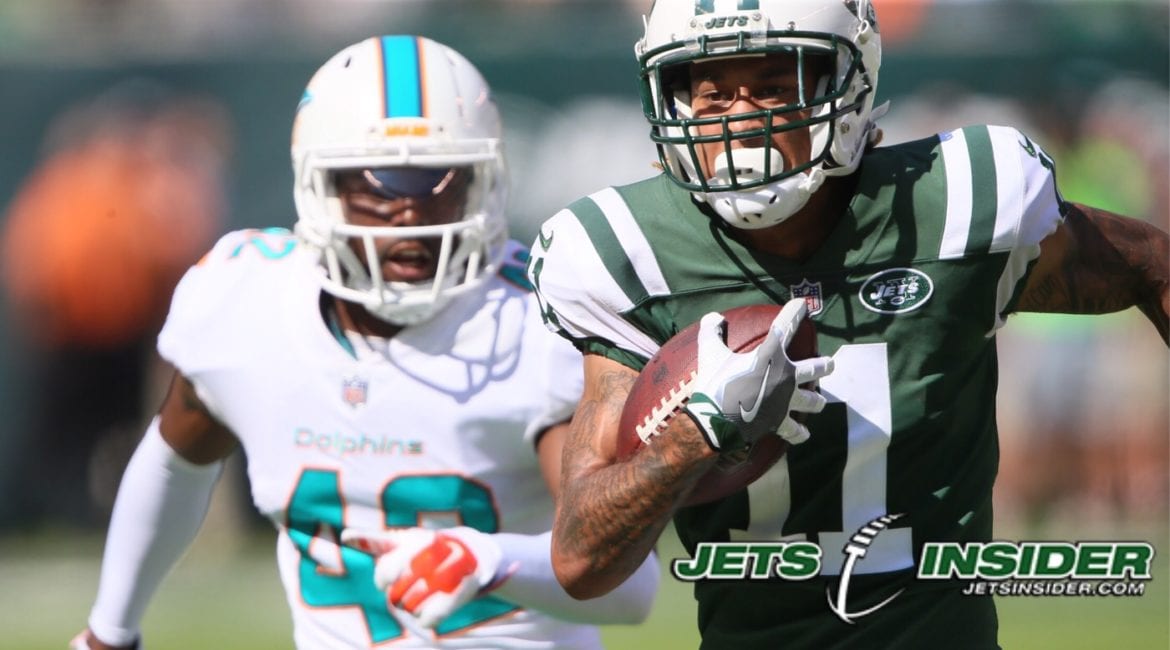 The Dolphins finished the game with 225 yards of total offense, but most of that came in the fourth quarter and the game already in hand. With just over a minute to go in the third quarter the Dolphins had only gained 47 yards of total offense; they finished the game with 30 total rushing yards on 15 carries (just a slight improvement in the run defense from the first two weeks), sacked Jay Cutler three times and picked him off once while also intercepting the Dolphins punter on a fake punt. The Jets offense took awhile to get going and sputtered at times but they were far more efficient and productive than the Dolphins.

It was far from a perfect day for the Jets, but they got a much needed win just the same and as we like to do following a Jets win it’s now time to handout some game balls.

Josh McCown – Josh McCown is still Josh McCown, but he has been exactly what Mike Maccagnan hoped he could be when he signed him this offseason. McCown has brought a much needed stabilizing energy, veteran leadership that is respected throughout the entire locker room and he’s actually played slightly better than most would have expected. Yesterday McCown was extremely efficient, finishing the game 18-23 for 249 yards (10.8 yards per attempt) one touchdown and zero turnovers. On top of those efficient numbers, McCown spread the ball around to multi targets. Austin Seferian-Jenkins and Jeremy Kerley led the team with five catches, Robby Anderson and Jermaine Kearse each hauled in three catches and ArDarius Stewart and Lawerence Thomas both had one impressive catch a piece.

Robby Anderson – Robby Anderson only had three catches on the day, only bringing in half of the six targets he got, but he got the Jets started and his speed opened things up for the rest of the offense. The big play of course was the 69 yard touchdown pass which was just pure speed and a beautiful pass from McCown.

Lawerence Thomas – One catch for 15 yards isn’t likely to get you a game ball, being a defensive lineman who willingly converts to fullback most certainly will. The coaching staff approached Thomas about the idea of using him at fullback, Thomas was a fullback blocking in front of Le’Veon Bell for a year at Michigan State, and Thomas never hesitated. When the referees first announced “number 97 is an eligible receiver,” us reporters thought ‘oh this is an interesting wrinkle for this play,’ but when they kept making the announcement over and over again it was clear that Thomas playing fullback was a big part of the gameplan and it worked. It sure would have been fun to see him score a touchdown on that catch though.

Demario Davis – The Dolphins offense couldn’t get anything going until the fourth quarter and Demario Davis was a big reason why. Davis played fast and confident, stuffing the run and doing a great job of flooding the middle of the field to negate the Dolphins short passing attack. Davis finished the game with 12 tackles, 11 solo, with three of them for a loss of yards. Davis has notoriously been a liability in coverage, but yesterday he was a huge reason why the Jets were able to stymie the Dolphins pass game.

Terrence Brooks – Terrance Brooks was a late addition to the Jets, joining the team after being traded for cornerback Dexter McDougle after the third preseason game and yesterday that trade paid off as the safety recorded two interceptions. One of the interceptions coming on a fake punt which didn’t fool the Jets punt team for a second.

Jamal Adams – The rookie safety continues to show why Maccagnan made the right decision to draft him with the sixth overall pick. Adams once again didn’t allow a single catch against him, also recorded a pass breakup and tacked on a sack. Adams energy and leadership is infectious and while the Jets defense was disappointed in themselves for giving Marshawn Lynch a reason to dance on the sideline last week, they were happy to be able to do some dancing themselves yesterday. The rest of the season is unlikely to play out as it did yesterday for the Jets as a team, but the play of Adams will continue to be impressive week after week and Jets fans should enjoy watching every snap he plays.