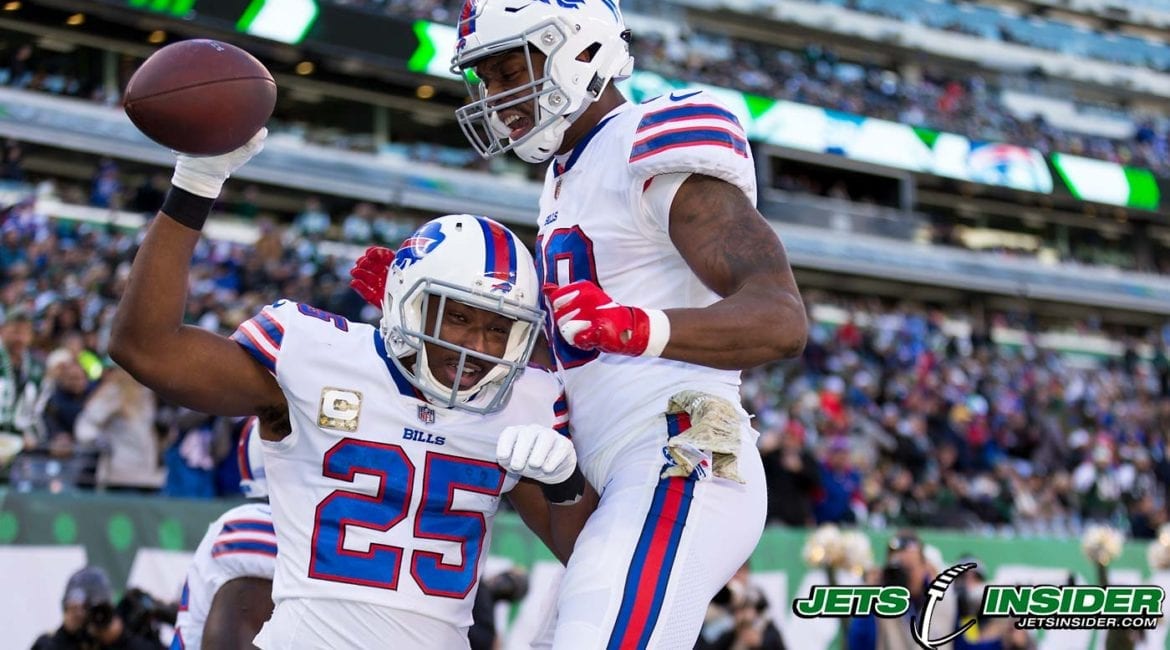 The New York Jets continue their miserable season on Sunday visiting their division rivals Buffalo Bills. The Jets are coming off one of their heart-breaking losses of the year to the Tennessee Titans 26-22, after blowing a 16-0 lead.  The Bills lost to the Miami Dolphins on Sunday by a score of 21-17.

It’s been four weeks since these teams have met and since then Buffalo has been able to jump ahead of the Jets in the standings. After beating the Jets, the Bills went on to defeat the Jacksonville Jaguars by a score of 24-21 to avenge their loss in the playoffs last season. The Jets losing streak continued and they are now up to six consecutive losses, essentially ending their season.

When these two teams met the first time, the Jets were the favorite to win mainly because they had home field advantage. Josh McCown was starting which gave the Jets a chance to see consistent play at the quarterback position and the Jet defense was performing much better than the Buffalo defense at the time. The Bills had Matt Barkley, an NFL cast off and a fourth stringer, in at quarterback. Meanwhile, running back LeSean McCoy was having a tough year and the Bills defense was giving up the sixth highest amount of points in the league. Looked like a no brainer but boy did the Bills shock everyone.

Barkley looked like Peyton Manning, finishing 15/25 with 232 yards and two touchdowns and the Bills squashed the Jets winning 41-10. McCoy would have his best game of the season rushing for 113 yards and two touchdowns on 26 carries and the Bills defense shut down the Jets offense. McCown looked he was lost, only completing half of his passes with two interceptions and the Jet secondary could not defend for their lives. The only positive was that Jets run game finished with 79 yards on 17 carries, but of course, wasn’t used enough.

With the season now winding down and coming to an end, both teams have nothing to play for but pride. The Jets are in last in the AFC East with a 3-9 record while the Bills are in third with a record of 4-8. Both Sam Darnold and Josh Allen will go head to head at quarterback in this game. Buffalo also cut wide receivers Kelvin Benjamin and Andre Holmes this week. Here are some more details about the rematch.

Stop LeSean McCoy: Since their first meeting against the Jets, McCoy has struggled. The 113 yards against the Jets is his season high and only game where he had over 100 rushing yards. Seems like the Jets always bring out the best in their opponents because he basically was held in check by every other team. If the Jets run defense can finally show up and stop McCoy and the Buffalo run game, Gang Green will have a good chance to stop the Bills offense.

Finish In The Red Zone: The Jets are in last place in red zone scoring and it is hindering their chances of putting points on the board. They have had to rely on kicker Jason Myers to put points on the board from the red zone the whole season. Kudos to Myers since he has been the best player for the Jets and should be a Pro-Bowler this year. However, three points is not enough and the team needs to finish its drives. The Jets offense scored no touchdowns playing inside the red zone against the Titans and if they just had one touchdown, the Jets would have come out on top.

Take No Penalties: Penalties were a problem for the Jets during the pre-season and start of the regular season. In recent weeks, the team was more disciplined until last Sunday when they were called for 11 penalties against the Titans, a season high. The avoidable penalties ranged from holding, facemasks, and unsportsmanlike conduct. Penalties either killed solid offensive drives or helped the Titans gain more yardage and move down field. They need to be avoided at all costs if the Jets are expected to compete at their highest level.

X-Factor: The play calling for the offense as of late has been problematic for the team. Against the Patriots, the Jets were down 13 points in Patriots territory with eight minutes left in the game. Instead of running hurry-up or no huddle, they took their time on the field as if they were ahead by three points. Against the Titans, their lead got slimmer so they tried to run the clock out with running plays; that in turn cost them the game after the Titans took the lead with less than a minute left in play. Jeremy Bates has been a public enemy number one to Jets fans and his play calling has been horrendous. The Jets haven’t scored a touchdown in the last seven quarters and have had to rely on field goals. That cannot be the case against Buffalo.

Prediction: Jets 13, Bills 24 – On paper, the Jets are the better team but for some reason they manage to find a way to lose each game because they have been outcoached and outplayed. The Bills will have the home field crowd behind them this time and the Jets will stick to their same old ways of struggling in the red zone. The Jets will lose their seventh game in a row. Better start reading Mel Kiper’s Big Boards.