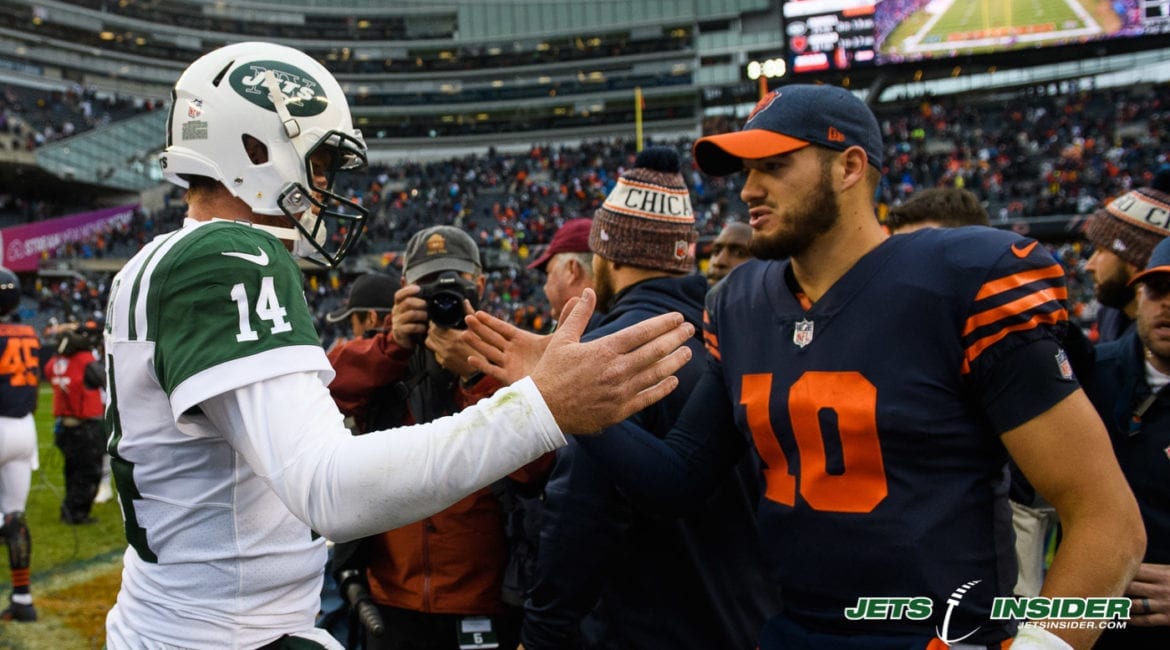 The New York Jets will be back on the road this Sunday as they travel to Chicago to face the Bears.  This season, the Bears are starting their resurgence in the NFL and currently sit at 3-3. In their last game, the Bears fell to the New England Patriots 38-31 but had an amazing opportunity to tie the game and just fell short. With no time left, quarterback Mitchell Trubisky launched a Hail-Mary pass from his own 40-yard-line to Patriots two-yard-line. Wide receiver Kevin White caught the ball and was brought down before he could cross the goal line.

In the off season, Chicago made a change at head coach firing John Fox and hiring Kansas City Chiefs offensive coordinator Matt Nagy. They also added some new players including tight end Trey Burton, who is best remembered for throwing a touchdown to Nick Foles in the last year’s Super Bowl. That play put his name on the map and this season he has proven to be a reliable starter racking up 325 yards and four touchdowns. Without argument, the biggest acquisition the Bears made was acquiring the best pass rusher in the NFL, Khalil Mack. Mack is having a fantastic season notching 16 tackles, four forced fumbles, five sacks, and a pick-six.

It’s been a few years since these teams met and now they have different looks. The Bears and Jets have met five times in the last 18 years with the Bears hold the advantage wining eight times. Here is some more information about Sunday’s game.

Attack Through The Air: The Bears defense has been effective in shutting down their opponent’s run game this season. The Jets run game last week against the Minnesota Vikings was a disaster with Bilal Powell leaving the game and Isaiah Crowell playing with a foot injury. It won’t be getting any better this week. With a long list of injuries, the Jets are currently weak at the wide receiver position, but that better not limit them through the air. Deontay Burnett, Charone Peake, and newly acquired receiver Rishard Matthews will have big shoes to fill and need to step it up. Sam Darnold had his first real taste of playing in cold weather last Sunday but said it didn’t affect his game. The weight of the offense on Sunday is going to be on his shoulders and after having a bad game, the Jets will need him to bring his A-game in Chicago.

Cancel Out Khalil Mack: Brandon Shell and Brian Winters will be facing Mack on the right side of the offensive line. Mack has been the Bears best player on defense and is someone that could have an impact on turning the game around. If Mack can be double-teamed by Shell and Winters, it will give Darnold more time in the pocket to make smarter decisions. If Mack becomes a problem, it will be a rough game for the Jets especially since Darnold likes to roll out to his right.

A Confident Quarterback: Over the last few weeks, Darnold has shown signs of maturity. He’s been throwing deeper passes, calling audibles more frequently, and scrambling with the ball when he is pressured. He is really showing fans what the future of the Jets franchise will provide as he reaches his full potential. Against Minnesota however, Darnold showed his rookie limitations and frustration on the field. He overthrew wide receivers multiple times, threw three interceptions, and was less than happy with his overall execution. If he can remain confident on the field, regardless of the situation presented in the game, his leadership will give the team around him confidence.

X-Factor:  It is pretty obvious from the keys to the game, there are two x-factors for the game against the Bears. One, naturally is Darnold. He is coming off a game where he had a season low completion percentage (40.5) and passer rating as well (34.4). The Jets offense struggled as a whole between bad snaps, short yardage gains from runs, and dropped balls. If Darnold can find a groove early on and be able to make plays, it well help the Jets move the ball against a strong defense. More importantly, it would give the Jets exhausted defense some much needed rest. Second, can the Jets overcome their injuries? With a depleted secondary and wide receiver corp that is missing half its starters, will the replacements be enough? Even center Spencer Long who has been plagued with a finger injury now has a lower leg injury. Need I say more?

Prediction: Bears 28, Jets 13 – The Jets will have their hands full against a team that will make their running game ineffective and will constantly pressure the quarterback. If Darnold is able to play like he has in week six and seven and the newbie wide receivers get open, the Jets will keep it reasonably close. Unfortunately, Darnold will need less pressure on him and more time to find open receivers. If the Jets offensive line can’t do that, the Bears will easily be celebrating their fourth win of the season.