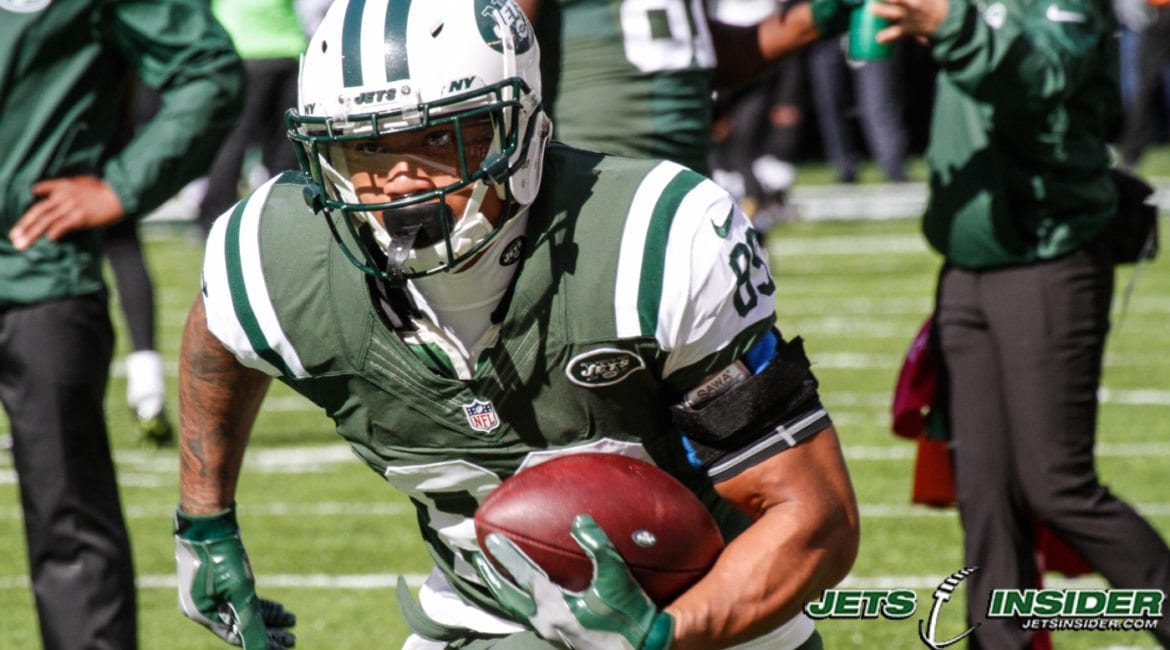 It’s 3rd down and 3 from the Bills’ 6-yard-line. Ryan Fitzpatrick has Jalin Marshall in the slot to his left. Across the line of scrimmage from Marshall is Shareece Wright. Fitzpatrick hikes the ball, and throws it to Marshall on the out route. He catches it at the one. Wright quickly wraps up Marshall, so Marshall dives for the end zone and gets the ball across the goal line. The Jets push their lead over the Bills to 17-3.

This was the last receiving touchdown for Marshall in the NFL. The Jets failed to make the playoffs and he was suspended from the NFL for the first four games of the 2017 season. During that time, Marshall used his free time to remain in shape for his return.

“That was a big emphasis of mine,” Marshall said. “Working hard, going everyday like I was here, practicing  and doing those little things that was going to keep me right when I got back.”

Marshall comes back to a new wide receiving group and new quarterback. Last year, he played with Eric Decker, Quincy Enunwa, and Brandon Marshall with Fitzpatrick throwing the ball. This year, the Jets have new players. Jermaine Kearse and Jeremy Kerley are veterans in the NFL, but have only been with the Jets for a month and a half, rookies ArDarius Stewart and Chad Hansen are still relatively new to the pace of the NFL, and Josh McCown is behind the center. For Marshall, he expects to play a bigger role this year.

“I can bring leadership here,” he said. “Being comfortable with the system and with your surroundings. It’s a new team now, and there aren’t a lot of leaders in the room. I can make sure my group is ready for each game in and out.”

It would be a challenge for Marshall to become a leader considering he was a rookie last year and was suspended for the first four games. At the same time, however, Kearse and Kerley came in to the Jets in September and made an impact in their short tenor so Marshall can have a big impact for New York.

Head coach Todd Bowles didn’t play Marshall last week against the Cleveland Browns because he wanted Marshall to get used to the offense. There’s been nothing but praise coming from Bowles on Marshall’s work ethic.

“He’s picking everything up, he looks good,” Bowles said. “He practiced for two weeks, but not really in pads, but he’s looked good so far.”

When it came to how they would use Marshall in the offense, however, Bowles and offensive coordinator John Morton weren’t as confident.

“We’ll see how it goes,” Morton said. “We’re still practicing and we’ll get a better feel for him later on.”

“We haven’t determined that yet, whether he is playing or not,” Bowles said.

Marshall still has Friday to prove to Bowles and Morton that he’s ready for Sunday’s matchup against the New England Patriots, but it could shake Marshall’s confidence if he doesn’t play.